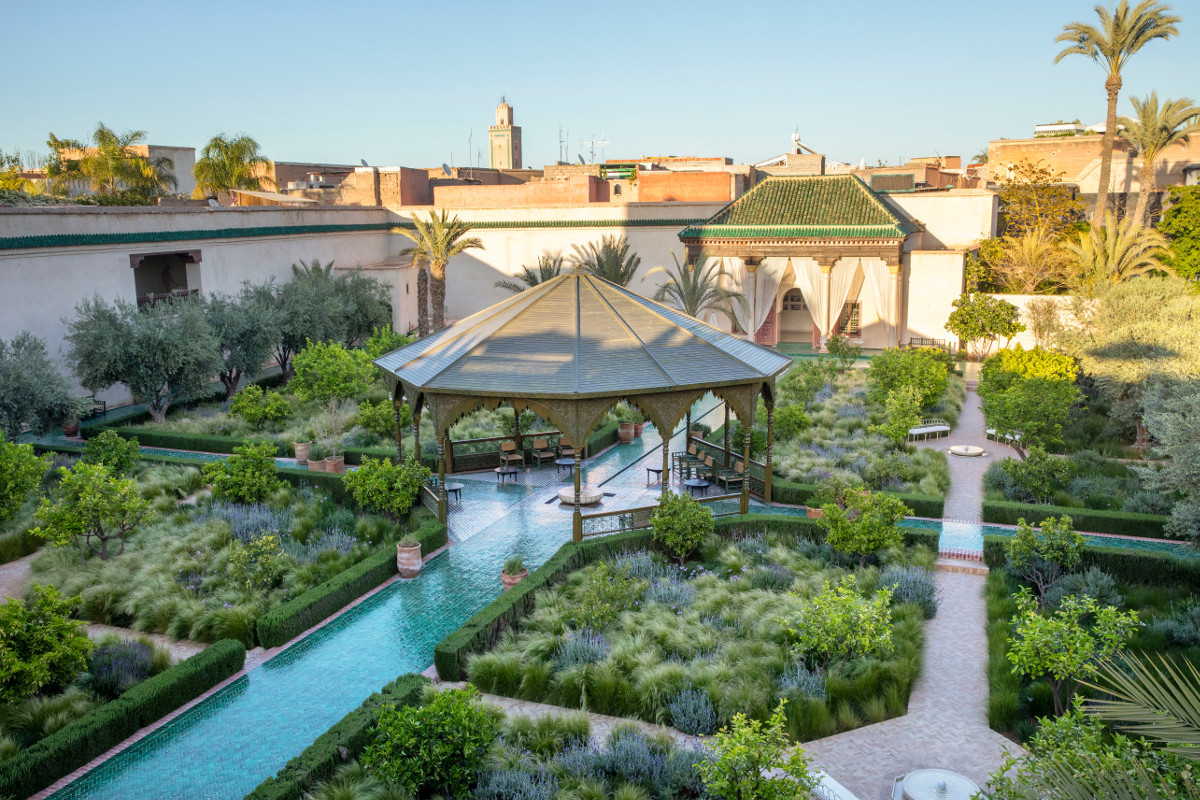 A NEW ATTRACTION FOR MARRAKECH

Le Jardin Secret, a new attraction for the city, a place dedicated to the discovery of Moroccan architecture, art and gardens opened its doors in Marrakech on March 20, 2016. Thanks to this pioneering project, a historic riad (a manor house with central garden in the medina) finally opened its doors to the public for the first time, following a three-year restoration.

The recent restoration has ensured the preservation of the complex, which had sunk into a state of severe degradation after decades of neglect. The project made it fully operational and its historic significance appreciable once again. All in a modern museum setting, with visiting itineraries, texts for in-depth explanations, videos and multimedia stations,you will be guided in the discovery of the riad’s history and its most important and original features.

The riad-museum is intended to be a centre for sharing knowledge and research on the old medina of Marrakech, on Moroccan and Islamic gardens and on the history of local traditional water systems. It welcomes collaboration with scholars and supports research by organizing meetings, presentations, conferences and book publications. At the educational level, Le Jardin Secret aims to host school groups as well as offering visits that broaden the knowledge of Morocco’s great cultural heritage and raise awareness about the need to preserve it.

FIVE CENTURIES OF HISTORY OF A MOROCCAN PALACE

The origin of the riad
In all probability, the first palace built on the modern-day Le Jardin Secret dates from the second half of the 16th century, when the Saadian sultan of Morrocco, Moulay Abd-Allāh, decided to build a monumental complex that included the Mouassine mosque and fountain (still visible today), a library, a hammam and various other structures in this part of the medina, then occupied by a small Jewish settlement.With the decline of the Saadian dynasty, Marrakech entered a period of crisis and, at the end of the 17th century, many of its most representative buildings were destroyed, including the riad that stood on the land of the modern-day Le Jardin Secret.

Rebirth
However, towards the middle of the 19th century, the reign of the Alawite sultan, Moulay Abd-ar-Rahmān, saw a renaissance in the architecture and art of the gardens of Marrakech: a renaissance that, in tandem with the rise of the great kaids, pashas and other officials, revitalised the domestic architecture of the city. Among the most influential figures in this century was also the Kaid, al-Hājj Abd-Allāh Ū-Bīhī, head of the powerful Hāhā tribe: we should probably credit him with the reconstruction, in accordance with the still visible layout of the complex from the Saadian era, of the building that we can admire today, shown as “Maison du Kaïd de Haha” on the Lambert Plan (1868). Having fallen out of favour with Sultan Muhammād IV, KaidŪ-Bīhī died after drinking poisoned tea.

Fragmentation, decline and restoration
Ownership was then divided between Loukrissi’s many heirs and Le Jardin Secret was soon the victim of indifference and general neglect, falling into a state of disrepair. In 2013, an idea from more than five years earlier culminated in a project to restore Le Jardin Secret to its former glory. This was completed in 2016.

The riad
Le Jardin Secret is made up of two separate complexes, each of which can be considered as a self-contained riad. The term riad is used in Morocco to describe any residence with a garden at its centre, as opposed to a dar, a residence in which the small extension of the oust-ed-dar (central patio) does not permit the planting of trees. Bordered by high walls without windows, the riad is laid out on a rectangular plan, around a large garden divided into four parterres by the intersection of two raised walks, at the centre of which stands a fountain or, as in Le Jardin Secret, a marble bowl (khossa).

The main buildings of the riad are at the two ends of the main axis, preceded by porticos with pointed arches (Oud el Ward pavilion) or wooden architraves (Hbiqa pavilion). The pavilions do not have great depth and display ceilings with exposed beams, double doors and windows close to the ground, given the custom of sitting on sofas placed directly on the ground.The servants’ quarters and service rooms occupied various small dars annexed to the riad, since lost.

The tower, qubba and hammam

The exceptional size of Le Jardin Secret was and continues to be evidence of the importance of the residence and its inhabitants.This importance is underlined by the small qubba, crowned by the traditional green glazed tiles, and the tower, later built beside it. Known as borj or menzeh, the tower, like the qubba, certainly had a symbolic role: towering above the medina, it reflected the wealth and power of its owner. At seventeen metres, the tower of Le Jardin Secret is as high as many of the minarets of the city’s mosques and today provides unique views over the city to the mountains, there are almost no other buildings of this kind left today in Marrakech. Its practical functions, however, are still unclear: was it a belvedere? or a watchtower? Another significant element is the hammam adjacent to the Hbiqa pavilion: by definition a public bath, to have one inside the riad was a sign of wealth and sophistication.

At the ornamental level, Le Jardin Secret is characterised by the wide use made of tadelakt (traditional lime-based wall coating)applied to brick walls and rammed earth, and also adorned with the finest products of Moroccan craftsmanship: zellij and bejmat (square and rectangular glazed terracotta tiles) from Fez, articles in inlaid cedar wood, hand-sculpted plaster items and geometric patterns painted by master decorators.

The exotic garden and the historical gardens of Marrakech
The focal points of Le Jardin Secret are its green spaces, today divided between the exotic garden and the Islamic garden.The exotic garden is home to plants that are rare in northern Africa and come from various parts of the world, recalling the search for universality and the experimental nature of the great gardens of Marrakech. Indeed, it should be remembered that, from the medieval era to the start of the twentieth century, the built-up parts of the city were in the minority compared to green spaces, Marrakech embodied the very model of a garden city, thanks to its vast parks and countryside appearance. This past is evoked not only by the names given to the city over the years (“rose among palm trees”, “oasis in the desert” or “Al Bahja”, the city of peace and the open air) but also by Agdal and Menara, huge royal gardens on the edge of the city that served, with their large water basins and numerous pavilions, as places of cultivation, leisure and even for training the king’s army.

Le Jardin Secret’s Islamic garden, on the other hand, offers a reconstruction of what the garden might have looked like in the 19th century. Closely connected to the buildings of the riad– to the point that it cannot be said with any certainty whether the garden was an essential part of the palace or vice versa – this type of garden was an oasis of peace, a place to shelter from the heat and the chaos of the city. The shade of the trees, the gurgling of the fountains, the scent of the plants and the intimate nature of the enclosed space all favoured leisure and contemplation.

History and features of the Islamic garden
The quadripartite layout, obtained, as can be seen in Le Jardin Secret, from the intersection at the centre of the garden of two walkways, was already a feature of the 6th century BC Persian gardens of Cyrus the Great and later appeared in Morocco at the beginning of the 12th century, filtered through Arab and Muslim traditions.

This layout, devised to enable the land to be more easily irrigated, reflected the need to organise the land in a well-defined grid and recalled the four rivers that divide into four parts the Paradise promised by Muhammad.The enormous importance attributed to the garden in the Islamic world can also be seen from the description of Paradise offered by the Qur’an: “And He will reward them, for their steadfastness with a Garden […] they will find there neither excessive heat nor excessive cold, and its shades will be close over them, and its clustered fruits will be brought within easy reach. (76:12-14). The garden therefore stands as a metaphor for Paradise, it is a holy place, designed on strict geometric rules, where the eternal order of Allah is imposed on the disorder of wild nature.